They're back in the zip code!

The twist in this revival is that these actors are playing heightened versions of themselves getting ready to play their characters from 90210.  With the recent passing of Luke Perry (Dylan), there may also be some type of tribute.  The original BEVERLY HILLS, 90210, which had a ten-year run back in the 1990’s, became an iconic teen and young adult primetime soap. 90210 just rolled off the tongue like a familiar friend along with its stars, most of whom are still in the public eye today.  Though the show got off to a slow start in season one, FOX saw the wisdom in airing original content in the hot summer months against repeats on the other nets.  Setting these summer episodes in a beach club location was a way to connect with younger viewers, gaining momentum leading into the show’s second fall season. The CW attempted its own version in 2008 with different characters in the same zip code and appearances by some of the original cast.  While the program lasted a few seasons (until 2013), it did not have the same panache, character chemistry, nor did it command the viewership or the public attention its predecessor did.  The premiere of this “current” BH90210 felt like a fitting time to take a trip down memory lane and see how the network primetime landscape has changed over the last 20 years. 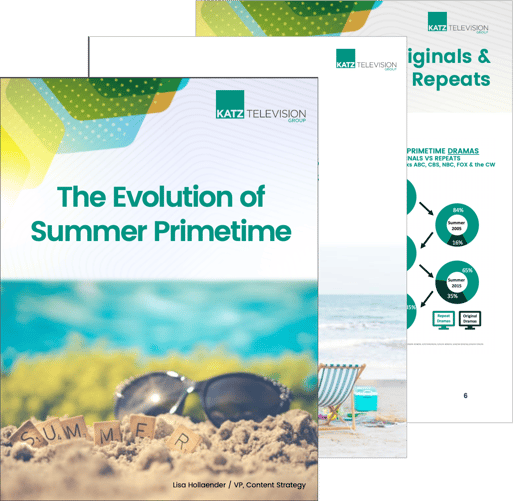 Let’s face it, while summer has always been a time of “fun in the sun, beaches, boating and family vacations”, for broadcast television summer used to be a bit of a “wasteland”.  The networks pretty much gave up on programming anything but news, scripted repeats and feature film encores.  This choice gave a few of the “bigger” cable networks a chance to air their own first-run creations, launching a new competitive source of original content to TV viewers in June, July and August.

This was most likely, in part, the nudge the networks needed to give more “oomph” to their summer line-ups. Granted, before VCR’s, DVR’s, ON-DEMAND and NETFLIX, viewers could catch up on the shows they had missed during the regular season in repeats over the summer.

In the summer seasons between 2010 and 2015, however, the tide began to turn for the broadcast networks as the number of repeats started trending down and the number of originals began trending up.   Not only that, but the types of programming airing throughout the summer changed as well.  Now, the networks tout slates of original content across a mix of genres throughout the year.