Get in the Game With Radio Play-by-Play 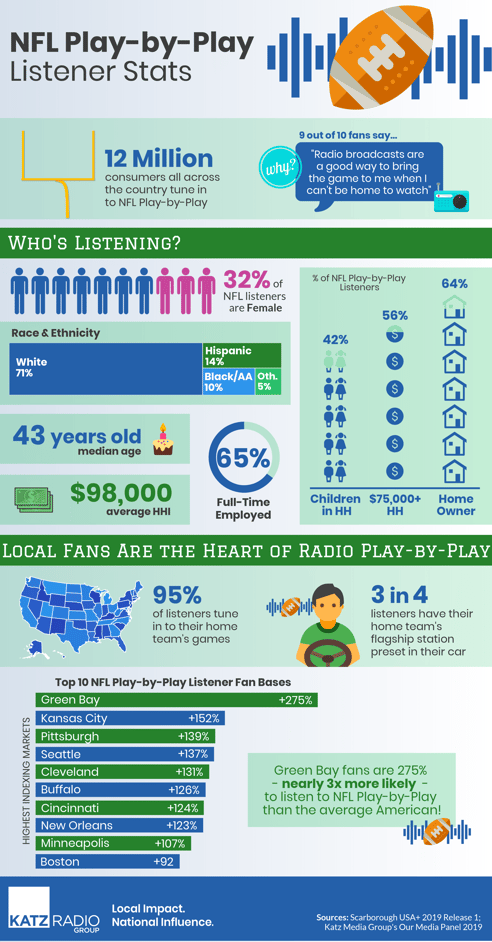 The NFL and Radio have something special in common - they are both celebrating a big anniversary in 2020. For Radio, it’s the 100th anniversary of the first commercial station broadcast, and for the NFL, its 100th season. In honor of these coinciding centennials, Katz Radio Group took a look at some NFL Play-by-Play listener stats to show why Radio and NFL are a great matchup.

Local Fans are the Heart of Radio Play-by-Play

Local fandom is the biggest driver for NFL Play-by-Play, with 95% of all play-by-play listeners tuning in to their home team’s games. Three out of four listeners even have their favorite team’s flagship station programmed in their car’s presets. Listeners tune in to NFL broadcasts in markets all across the country, but some fan bases prove to be stronger than others. Katz found that some markets are twice – and even three times – as likely to listen to NFL Play-by-Play broadcasts than the average American.

Radio Play-by-Play is a touchdown for advertisers, delivering loyal, engaged audiences in local markets across the U.S. Smart marketers know to look for fans wherever they may be - not just in their homes. With Radio Play-by-Play, brands can do just that and connect with fans who listen to their favorite team anywhere and everywhere they can tune in to the game.