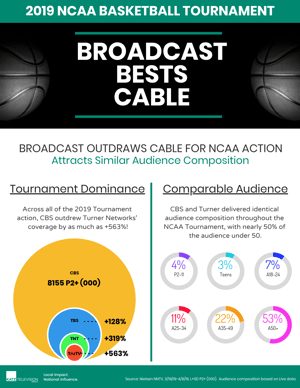 The swish of the ball into the net, the bang of the ball hitting the backboard, the tap, tap, boom, boom of the players on the court, the crowd cheering, the exhilaration and excitement of engaging viewers for another year of March Madness!  Oh, and let’s not forget those brackets!

CBS Sports and Turner Sports provided live coverage of all games across CBS, TBS, TNT and truTV as well as on streaming services.  This year's NCAA Basketball Tournament began with the FIRST FOUR on truTV and ran until the NATIONAL CHAMPIONSHIP GAME on CBS where “first-timers” to the “ultimate game”, the Virginia Cavaliers whipped Texas Tech 85 to 77 in overtime.

With the FINAL FOUR and the NATIONAL CHAMPIONSHIP GAME back in CBS' court, the network boasted gains over last season’s tourney across all key demos.  CBS also eclipsed the Turner Networks' performance, and more specifically TBS (the strongest of the three cable properties), by more than double in HH's and key demo ratings.

On a side note, the NCAA Basketball NATIONAL CHAMPIONSHIP GAME took its place on our "Power of Live" Primetime meter, landing between THE GRAMMY AWARDS and THE GOLDEN GLOBES, but below other sporting events such as the SUPER BOWL, and the AFC and NFC CHAMPIONSHIPS.

Highlights of the Katz Television Group analysis include: